Objects As Magazines / Magazines As Objects is the title of an exhibition currently running in Art Book in Milan that looks at a wide range of publications that explore publishing territory beyond the usual flat, bound magazine format… 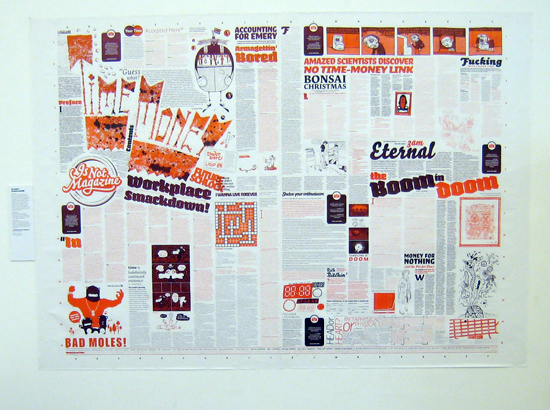 Is Not Magazine from Melbourne, Australia takes the form of a 2 x 1.5 metre poster laid out on a grid, a bit like a map. Find the contents box and it guides you to each article.

Objects As Magazines / Magazines As Objects is the title of an exhibition currently running in Art Book in Milan that looks at a wide range of publications that explore publishing territory beyond the usual flat, bound magazine format.

“When I was invited by SignJam to create an exhibition about magazines, I chose Objects as Magazines because a) it’s more interesting than just looking at flat magazines, and b) because I’m very interested in those who push the boundaries of what a ‘magazine’ can be,” explains Losowsky. “I love the way that magazines create a regular relationship with their readers, bringing them what they expect and what they don’t at the same time. They’re an extremely ephemeral medium – newspapers are archived online, but magazines rarely are. They have a less formal, more entertaining relationship with their readers than newspapers, and they’re often close collaborations of design and text to tell stories in ways that other media so far have barely touched. And as independent magazines flourish, so the possibilities of what a magazine can be are further extended.”

All of the exhibited magazines are from Losowsky’s extensive personal magazine collection. Here are some images of a selection of works from the show, each accompanied by Losowsky’s excellent explanatory caption text: 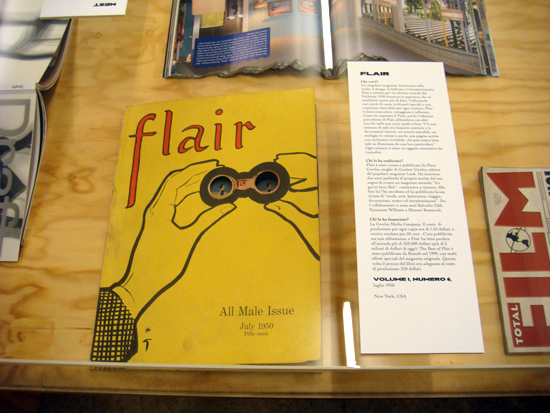 WHAT IS IT? Flair is a unique American magazine about fashion, design, beauty and entertainment, Flair lived for 12 monthly issues from February 1950 – it wasn’t expected to last even two. Using various paper stocks, special inks and a die-cut cover on each issue, it was innovative, brave and influential. As Time magazine reported, even the preview issue of Flair abounded with other tricks beneath its peak-a-boo cover: “There is an accordion-style pull-out on interior decoration, a pocket-sized book insert, a swatch of cotton fabric, even a page written in invisible ink that can be read when it is heated by a lighted match.” Each issue was an interactive object to be cherished.

WHO MADE IT? Flair was created and edited by Fleur Cowles, the wife of Gardner Cowles, publisher of the popular Look magazine. She spent two years telling her husband about her dream for a monthly magazine; “It’s got to have flair,” she would repeat. Eventually he gave way and published her “fashion, art, literature, travel, decor, theatre and entertainment” magazine. Contributors included Salvador Dalí, Tennessee Williams and Eleanor Roosevelt.

WHO PAID FOR IT? The Cowles Media Company. Each copy reputedly cost $1.26 to make, and sold for 50c. There was advertising, but not enough, and Flair lost the company more than $350,000 (more than $2m today). The Best of Flair was published by Rizzoli in 1999, featuring many of the special effects of the original magazine. This time the book’s price did closer reflect the costs of production: $250 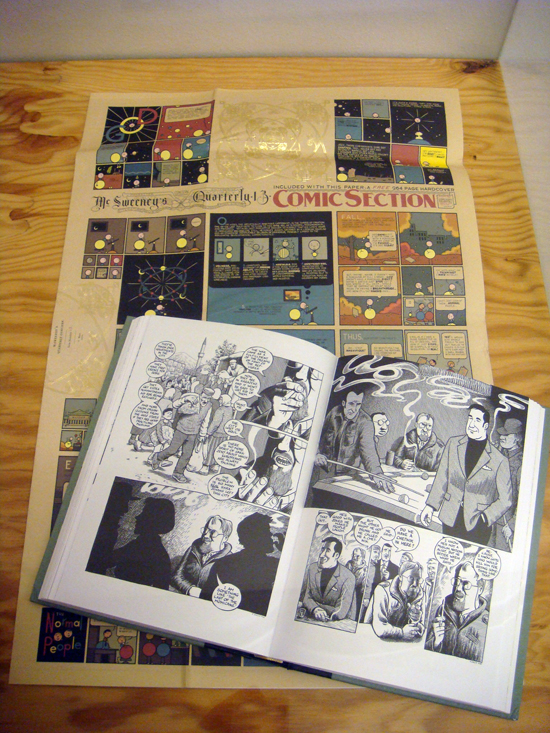 WHAT IS IT? Since its first issue in 1998, this literary journal has grown into a playfully strange cult magazine. Editions have included a pack of cards with an embossed plastic comb, a cigar box filled with photographs and antique ephemera, and a faux-leather case with a magnet holding three metallic-bound paperbacks in place. As the name implies, McSweeney’s is published on a “roughly quarterly” schedule. Each issue features contributions from a variety of writers including Stephen King, David Foster Wallace and Michael Chabon.

WHO MAKES IT? It was founded by writer Dave Eggers. Aside from the Quarterly Concern, McSweeney’s publishes a monthly literary magazine called The Believer, the DVD magazine Wholphin, and has two book imprints.

WHO PAYS FOR IT? In its ten year existence, McSweeney’s has built up a loyal subscriber network, each of whom currently pays $55 a year. The magazine contains no advertisements, and doesn’t accept corporate sponsorship. Compilations of the best of McSweeney’s are produced by mainstream publishers, helping to fund the venture. 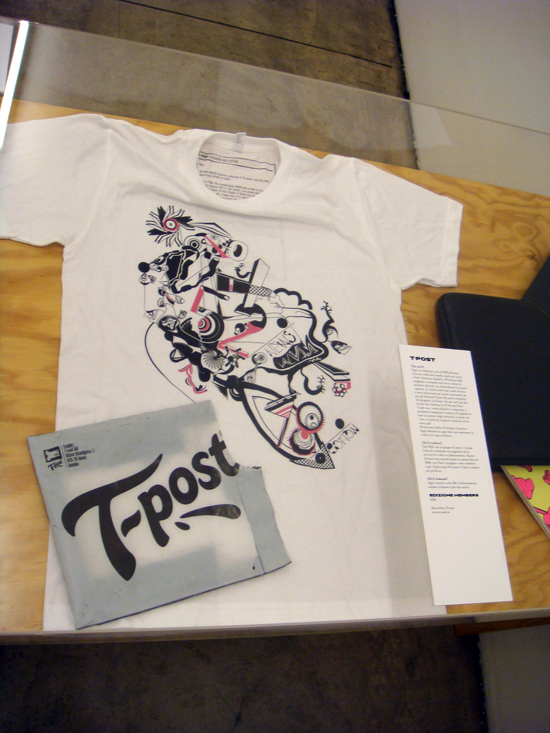 WHAT IS IT? Every six weeks, more than 2000 subscribers receive a new American Apparel t-shirt in their mailbox. On the inside of the t-shirt is printed a lesser-heard story from the news; on the front, an invited artist illustrates their response. The chosen stories range widely, and are picked to be relevant both in T-post’s home country of Sweden, as well as in the 47 other countries where its subscribers live. T-post doesn’t sell previous issues—they print the number of shirts to match the number of subscribers, so that “you can’t go trying to buy one like ‘you was with it way back when.’” They also claim to limit the number of subscribers in each city, to keep the t-shirts exclusive.

WHO MAKES IT? In 2004, a group of friends came up with idea of combining a news magazine with a by-subscription t-shirt service. They formed a company around the idea in 2006, with Peter Lundgren as Editor in Chief. Nearly 40 issues on, T-post is thriving.

WHO PAYS FOR IT? Each issue costs €26, sight unseen. Minimum subscription is for two issues. 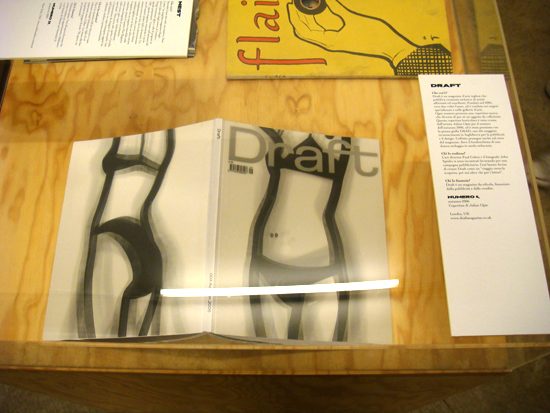 WHAT IS IT? Draft is a British art magazine that publishes exclusive creations by both established and upcoming artists. Founded in 2005, it comes out twice a year, and is sold in specialist bookshops and galleries. Each issue features an unusual cover, making it a collectable object in its own right. This lenticular cover was created by artist Julian Opie for the Autumn 2006 issue, and was awarded a D&AD yellow pencil, one of the top awards in British advertising and design. The effect also continues on the back of the magazine, where the woman’s bottom wiggles seductively.

WHO MAKES IT? Art director Paul Cohen and photographer John Spinks met while working on an advertising campaign. They decided to create Draft as “a voyage of discovery, for us as well as the readers”.

WHO PAYS FOR IT? Draft is a newsstand magazine, funded by advertising and sales. 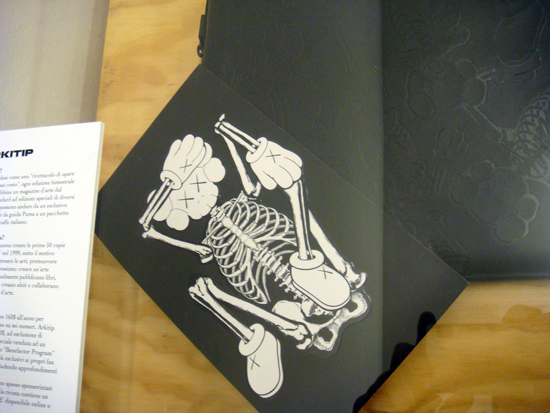 WHAT IS IT? Describing itself as “site-specific artworks at a modest price”, each bimonthly issue of Arkitip pairs an art-themed, standard-sized magazine with special edition, usable objects, ranging from an exclusive pair of Puma driving gloves to a packet of blended Italian coffee.

WHO MAKES IT? Five friends made the first 50-copy Arkitip ‘zine’ in 1999, under the founding principles “support the arts; promote freedom of expression; make art affordable and accessible”. They now also publish books, sell prints, make clothing, and collaborate with galleries.

WHO PAYS FOR IT? Subscribers pay $160 a year to get a locked-in price on six issues. Arkitip usually costs $30, although some special editions sell for much more. Its “Benefactor Program” offers more exclusive subscriptions to hard-core fans, including low-numbered, signed copies. The accompanying objects are often sponsored by the products’ makers, and the magazine contains minimal advertising. It is available to purchase online or in stores. 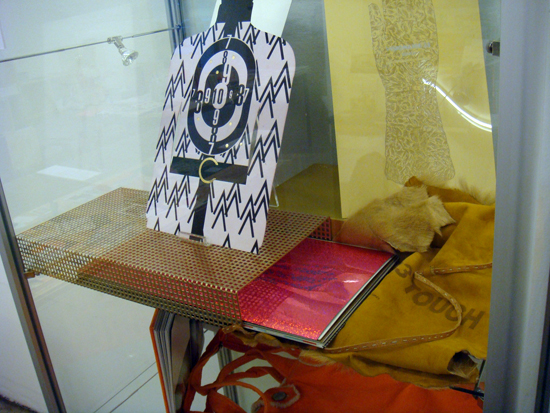 WHAT IS IT? Each issue of Visionaire is nothing like the previous one, or like any other publication. Its creators aimed from the start to make “something that people wouldn’t throw out, that would be filled with [pages] that you wanted to save. And since ads control mass-market editorial content, we’d get rid of the ads.” It evolved into an almost absurdist creation of limited-edition opulence, involving unusual materials, strange formats and big-name collaborators. It is probably the most expensive magazine in the world, with one issue costing $5000. It comes out three times a year; each edition has a theme, and is a limited edition of between 3000-5000 individually numbered copies. It is sold online and in their Manhattan gallery.

WHO MAKES IT? Founded in 1991 by Cecilia Dean, Stephen Gan and James Kaliardos, the company Visionaire Publishing maintains a number of different projects, of which Visionaire is the most high-profile. It also publishes two mainstream fashion magazines, V and V Man.

WHO PAYS FOR IT? Issues of Visionaire are often sponsored by fashion brands, who cover the costs of production. Copies are available at full price via Visionaire’s website, with annual subscriptions costing $675. On ebay, ‘visionairepublishing’ sells unopened copies at a reduced rate.