Oi, Art Ponce,ponce this up for me.

In advertising, too few people understand what art direction is, the job it’s meant to do or the process of doing it.

I have no unreasonable or unrealistic artistic agenda. That’s not what good art direction is about. But I do aspire to make work that works. I aim to make ads that make people think and feel something about something and in some way become a part of culture. That’s what the best advertising does. It goes from being a trite, tedious, annoying interruption, to something even the most cynical and media savvy amongst us will notice, enjoy, digest and act upon.

In advertising, art direction is the process of making a page look the way it needs to in order to attract and engage a specific audience or target market, so that said group notice, engage with, digest, retain and act on information being communicated to them.

But it often feels that the way a poster or print ad looks is no longer of any importance. The majority of work that’s out there on the billboards and in the newspapers and magazines is all the evidence I need. (Aside from my experience of working inside several agencies and dealing with many clients.)

Art direction is as important in the advertising process as planning, copywriting, media placement or anything else. Why then is it always the first thing to be sacrificed? And why is it perceived that the more derivative and formulaic an ad appears, the better it will work?

Style and content in the context of good advert¬ising are inextricably linked. Yet too many people involved seem to be suspicious of art direction. They don’t understand it, and consider it in some way fey or representative of the ‘emperor’s new clothes’. There seems to be a prevailing attitude, that if the agency’s agenda is to show commitment to the way a campaign looks, it must be too concerned with style over content.

Making ads that look like ads is a big mistake. Of course something that resembles what has gone before is easier to sell to the unimaginative client by the account man who doesn’t want to rock the boat. But in a new world, where people can fast forward ads on tv and turn off web banners, the only effective way to impart a message on behalf of a client is via genuinely entertaining and engaging content.

There is a long way between thought and expression. Great art direction should turn an idea into genuinely entertaining and engaging content. 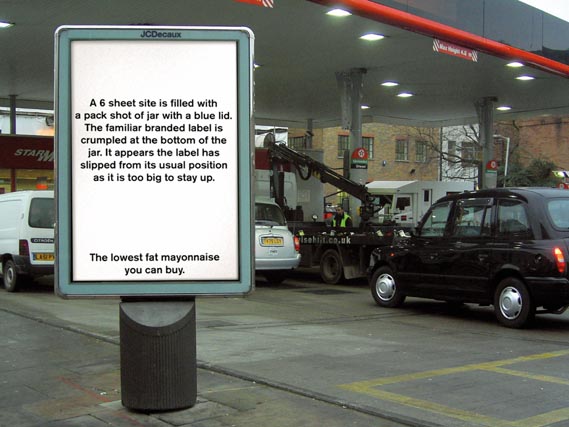 Take the recent Harvey Nichols ‘for a wonderful life’ print campaign. The graph execution is the best. When flicking through the monthly fashion and lifestyle magazines there is no doubt this feels like a ‘New Page’: it looks like nothing else near it. Concept and art direction are inextricably linked. Yet there is no fat on the page (save for that shown in the photos). There is nothing mannered or fashionable about the ad, (except some of the shoes featured). 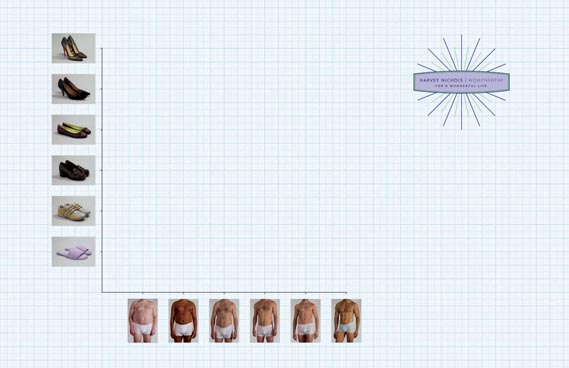 The creative team have not had to rely on stealing the latest visual tricks, fads and trends. They have conceived and presented information to the audience in a way that is rewarding, entertaining and wholly original. Ultimately they’re getting you to go to the store and buy some¬thing, like every other department store, but they give you a reason to go that is presented in a way that works and will strike a chord with those who are partial to that kind of thing.

Helmut Krone and George Lois are revered as two of advertising art direction’s all-time greats. They were pioneers of the ‘creative revolution’ of the 60s, when the concept of concept took hold. They relied on their instincts, intuition and massive professional experience, knowledge and craft, to make work they felt the audience would be receptive to. The aesthetic of everything they did was rooted in the concept. George Lois said that if he got it (the idea), and the execution was appealing and interesting to him, he knew that the rest of America would feel the same way.

This kind of innate conviction and bravery is absolutely essential to producing successful advertising and should be respected. It does exist in contemporary advertising, but too often it is undermined and belittled. The majority of those who buy work find committed, informed, passion¬ate art directors off-putting and extremely tedious to manage. It’s much easier to give the client what they want and move the annoying impudent creative who won’t stop trying to persuade them the right way is the right way to another account.

I don’t think the system has always been like this. I’ve noticed it changing as agencies shift the emphasis of what they sell to clients. Senior manage¬ment go to meetings and sell clients ‘the big idea’. Today, clients are sold one word, or a sentence on a board that sums up the essence of their brand and what they stand for. A lot of time and money is invested in getting to this point and it will be presented with conviction to the client by those in the agency who matter.

This is the point where the idea becomes separated from the execution. To emphasise one over the other is wrong. The big guns sell the big idea. But the junior account manager is sent down to try to persuade the client to buy the recommended execution. The situation is often compounded when the execution becomes a political bargaining chip, and is diluted by those who don’t know and don’t care, ultimately reducing the quality and effectiveness of the big idea. It seems that as long as something is made to fill the booked space, people are happy.

The system has little respect for the execution. People have lost sight of what audiences are receptive to. If you look at research into what people remem¬ber from ads, nobody in the public refers to the big idea unprompted. It’s the execution that they remem¬ber. Recall of ‘good things come to those who wait’ is much smaller than recall of horses in waves.

The idea is king. But if you lose sight of everything else you end up with work that clients love and audiences ignore. You’ll get work clients can present up the line to their chiefs that adheres to all the formulae, but you won’t get a drumming gorilla. It was recently reported that, though Cadbury Schweppes’ profits had fallen, the Dairy Milk brand had reported increased sales. I wonder if the new Flake ad will bring the same results?